Depending on the degree of decomposition, most UXOs (UneXploded Ordnances) in Europe’s coastal waters contain significant portions of ferromagnetic materials and are therefore detectable by magnetic sensors. In the field of systematic UXO detection, the operation of AUVs (Automatic Underwater Vehicles) can generally assist in improving the precision and reliability of the recorded magnetic data. AUVs are computer-controlled underwater vehicles the navigate mostly autonomous though following pre-defined courses.

Attaching a magnetometer to a robotic vehicle like an AUV that usually contains several electronic devices and electric motors always raises the problem of unpredictable (electro-) magnetic noise when the sensors are deployed too close to the vehicle. Therefore, it is desired to install the magnetometers in a substantial spatial distance to the sources of the magnetic noise. On the other hand, the computer-controlled underwater navigation becomes more and more ponderous when large cantilever arms are attached to the AUV.

A basic modular system was developed, consisting of aluminium poles and submersible magnetic sensors that can be attached to GEOMAR’s Girona 500 AUVs (http://www.iquarobotics.com) at a maximum lateral distance of 2 m ahead or astern. The utilized magnetic sensors are FGM3D/100 UW II 3-axis fluxgate magnetometers from SENSYS (http://www.sensysmagnetometer.com). The main magnetometer component consists of two sensors forming a vertical gradiometer of variable distance. The Girona 500 AUVs have hovering capabilities, which means that they do not need to continuously maintain horizontal motion. For gound-truthing purposes, a camera system and LEDs are deployed underneath the AUVs. Figure 1 shows AUV “Luise” and the magnetometer construction. 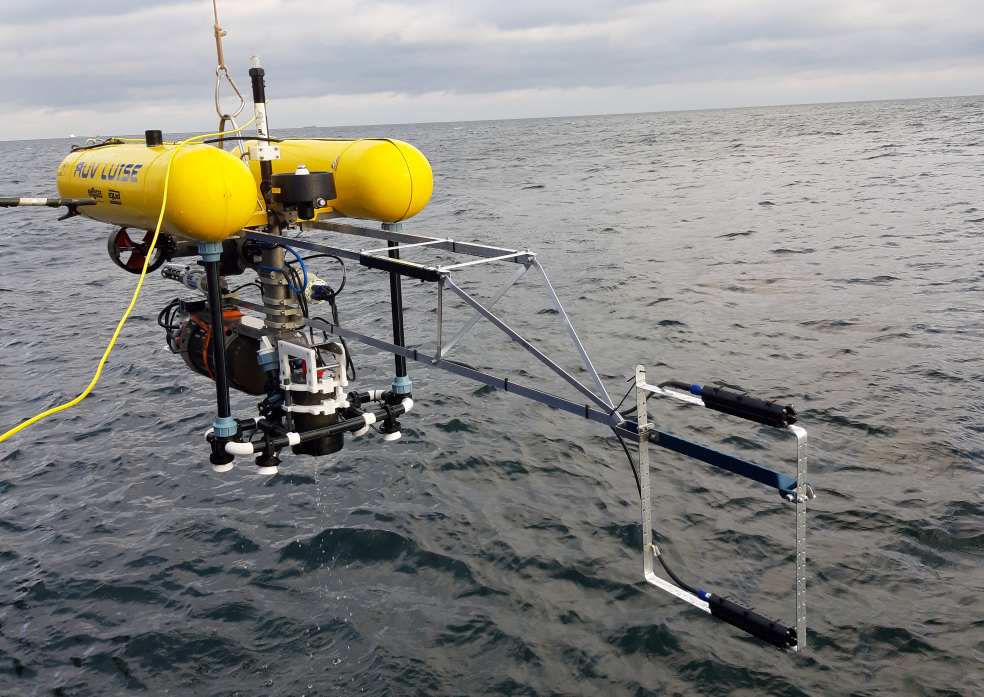 Data acquisition with the new system was successfully tested during field operations at the munition dump site “Kolberger Heide” near Bay of Kiel in autumn 2020. In the upcoming phase of the BASTA project, algorithms will be developed to automatically control the navigation of the AUV depending on in situ measured data.