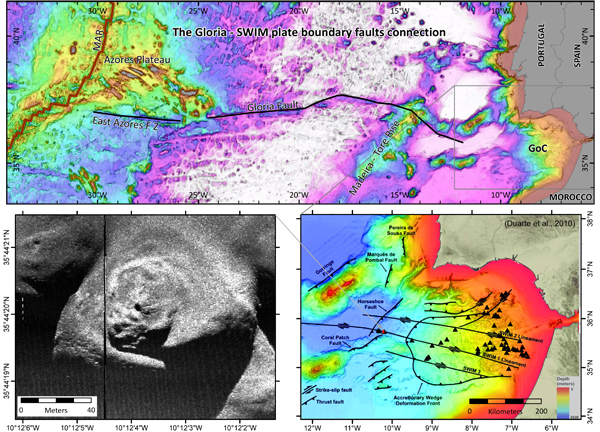 The Gloria-SWIM faults connection marks the plate boundary between Africa and Eurasia in the northeast Atlantic Ocean and is characterized by elevated seismic activity. At the eastern end, the SWIM faults run across the Horseshoe Abyssal Plain and the Gulf of Cadiz, which are the areas hosting the epicentre of the 1755 Lisbon earthquake (estimated magnitude M=8.5 to 8.9) and the 1969 earthquake (M=7.9). Mud volcanism is a ubiquitous feature on the accretionary wedge in the Gulf of Cadiz. New findings (Meteor cruise M86/5) indicate that fault activity induces mud volcanism also outside the accretionary wedge. Mud volcanoes were found at about 90 km west of the deformation of the accretionary wedge. The picture shows a detail of a high-resolution sidescan sonar survey at about 4500 m water depth (red dot).

The regional topographic and bathymetric map of the southwest Iberian margin is constructed from digital grids released by SRTM-3 and the ESF EuroMargins SWIM multibeam compilation (Zitellini et al., 2009).