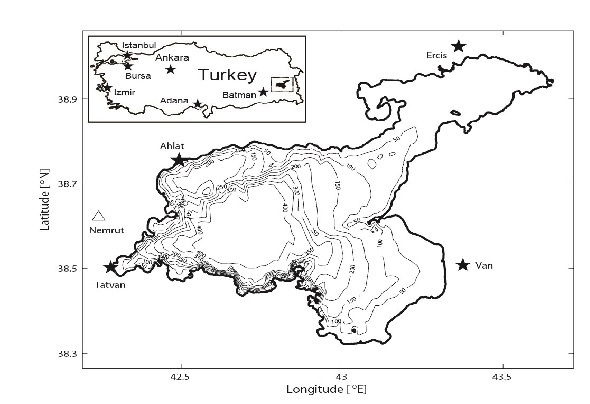 Location and bathymetry of Lake Van (modified from Tomonaga et al., 2014). Major cities are marked by stars. The position of the Nemrut volcano is indicated by an open triangle.

Lake Van (eastern Anatolia, Turkey) is one of the largest terminal lakes and the largest soda lake on Earth. The lake basin is situated in a tectonically active region in the vicinity of the triple junction of the Eurasian, Afro-Arabian and Persian plates characterized by the presence of major faults and volcanoes. The research conducted in Lake Van during the last two decades (e.g., Kipfer et al., 1994; Kaden et al., 2010; Tomonaga et al., 2011, 2012, 2014) sets a solid experimental basis to evaluate and interpret the geochemical changes induced by the devastating earthquake of magnitude 7.2 occurred in 2011 close to the city of Van.