Recent global projections predict a 10-20 % increase in the frequency and intensity of synoptic scale storm events with severe precipitation and floods for the Northern Hemisphere by the end of the century. The latest and clearly recognizable extremes in Central Europe are the floods in the Rhine and Elbe catchment areas in 2002. Each of these floods has caused more than ten billion Euros in damage, demonstrating their enormous ecological and socioeconomic impact. Due to the stochastic nature of such severe weather conditions, a thorough understanding of their temporal and spatial dynamics and the effects on the related systems, including ecosystems, is challenging. A thorough observation concept for such events is still lacking, especially with respect to their role on long-term climatic trends. The concept proposed here therefore aims at a better understanding of the interactions between short-term hydrologic events causing large-scale floods and their long-term ecosystem effects. Creating high-resolution event-based data and models and compiling them with our already existing data and models from long-term observatories will allow us to decipher the (potentially decisive) role of the increasing frequency and intensity of extreme meteorological and hydrologic events on the status of our hydrologic, ecological and socio-economic Earth systems.

The understanding of hydrologic extremes and their role in water and matter cycles requires a sound understanding of the interplay between system components such as clouds/rainfall, topography of the affected area and the different components of the aquatic and atmospheric systems. The interdisciplinary setting of MOSES builds on the knowledge, methods and data from a variety of scientific disciplines covering the various compartments (from atmosphere and landscape to lakes and seas). This interdisciplinary nature requires complementary extension and well-designed interlinking of existing observatories like TERENO, LTER, KITcube and COSYNA, by using components which allow adaptive operation that accompanies the course of the events. A central goal of MOSES is therefore the set-up of a mobile and modular sensor network, which connects and complements our existing stationary observatory networks and, in doing so, creates one integrated observation system along the event chain. The new modular MOSES approach furthermore allows us to physically concentrate sensor modules and units at specific locations and link them together to study specific events at a specific site in a much higher temporal and spatial resolution than is possible today. Taking the relevant Earth system compartments and the involved scientific disciplines into account, the proposed mobile and modular infrastructure can be assigned to three main interrelated application areas (A) the investigation of atmospheric processes during synoptic and convective scale storms causing heavy precipitation events and floods, (B) the investigation of hydrologic extremes in terrestrial and limnic environments and (C) the investigation of hydrologic extremes in the coastal environment.

This integrated MOSES approach will ultimately improve the quantification and modeling of hydrologic extremes and their impacts on the hydrologic and ecological Earth systems. Summarizing the above scientific and infrastructural challenges, three overall hypotheses will be addressed: 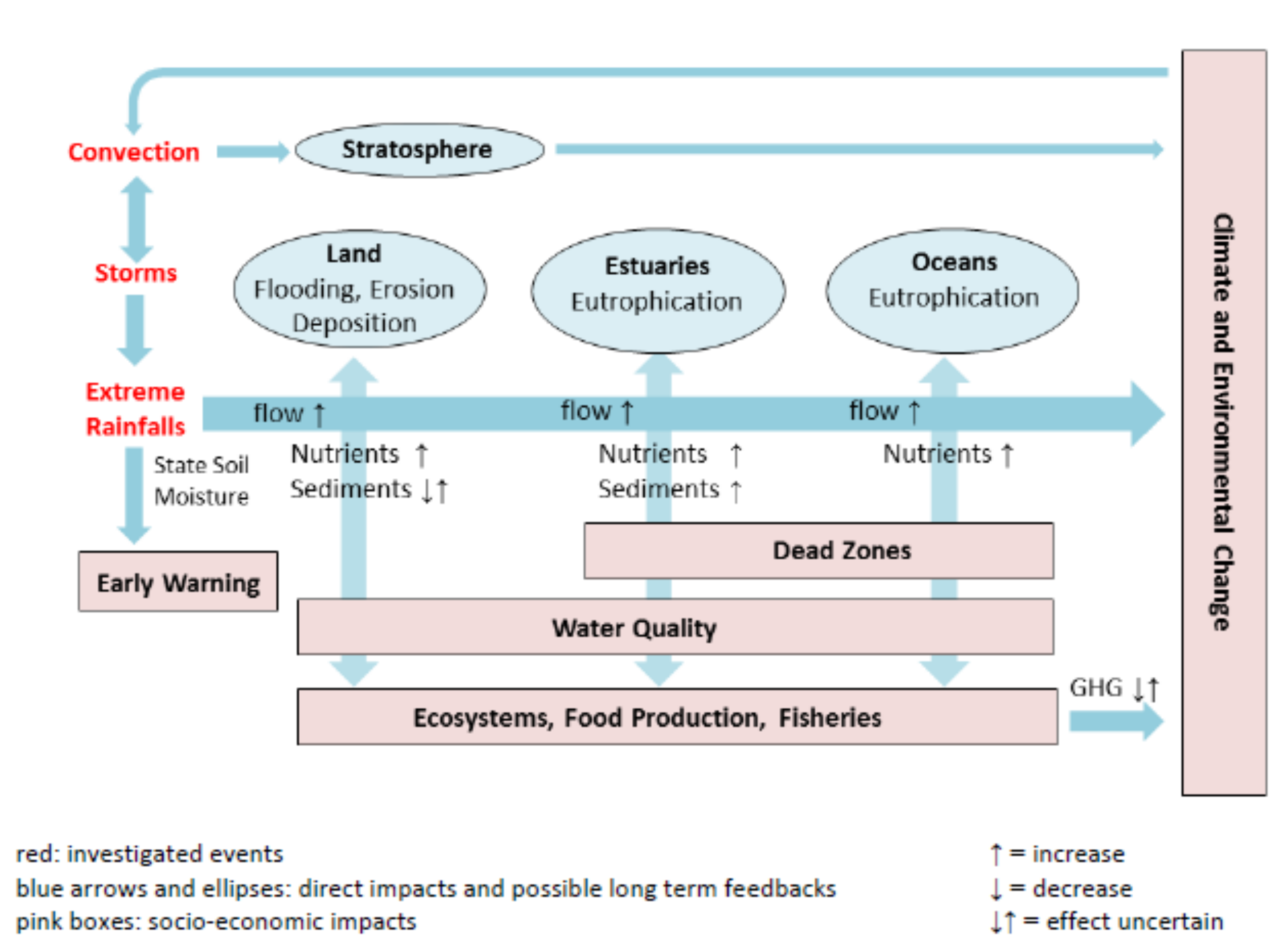 (1) Atmospheric High Precipitation Events (HPE) can cause severe flooding only by destructive “interference” of synoptic scale (cyclones) flow and humidity with atmospheric convection and flow over mountains. Flood risk is most pronounced in catchments where these factors coincide with specific hydrologic capabilities at times of saturated soil and/or snowmelt.

(2) High precipitation events have a significant impact on landscape evolution, soil properties and matter cycles of terrestrial systems. They have the potential to massively mobilize fertile top soils, are crucial for bedload transport in rivers and are driving the morphological dynamics of running waters at the river reach and catchment scales. The propagation of extreme precipitation events through the catchment and the river system to the coastal zone is an important driver for the structure and long-term functioning of terrestrial systems.

(3) Synoptic storm events with floods have a strong potential to affect the nutrient and health status of lakes and coastal environments by (1) a significant and pulse-like mobilization of nutrients, carbon and harmful substances from soils in the terrestrial environment and (2) a significant decrease in the retention time of these substances in the tributary waters, reducing their degradation and sedimentation rate prior to entering the coastal zones. Flood induced

The GEOMAR will be involved in studying coastal processes with the autonomous vehicles and fixed point observatories modules to mainly acquire hydrographic data since one objective will be a synoptic assessment of the river plume dynamics and the transport of the water constituents. These studies will be conducted using remotely controlled, buoy-supported vertical profiling units. Similar systems have been tested for long-term exposure in the North Sea and provide high-resolution oceanographic data along transects from the estuary towards the shelf ecosystem. Further studies include the coastal and marine mobile systems, flow and sediment dynamics and biota modules. Combined with mobile container units equipped with the special FerryBox sensor system technology and autonomous underwater robots, the remotely controlled marine profilers will continuously measure the relevant hydrographic variables to track the water masses and their constituents coming from the rivers to eventually enable modeling of their temporal and spatial dispersal in the shelf area.