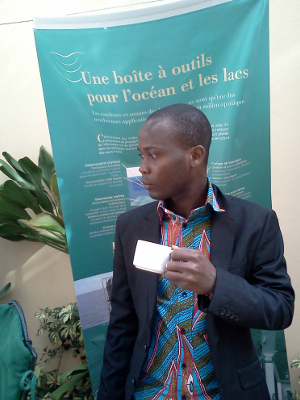 About myself: My name is Kodjo Mawouena AZIAYIBOR, I am a graduate of Toulouse(France) and Abomey-Calavi(Benin) University. I hold master's degree in physical oceanography. I am currently teaching physics at the secondary school.

I am interested in the air-sea interaction, specially in the biogeochemical modeling and the circulation. I would like than my career revolve around modeling, which I fondly call “ the heart of the science”. I have a excellent computer skills to analyze and research data. In research teams, good coordination between collaborators achieve the common goals set was one of my constant concern.

I would like to study the air-sea interaction for ocean during the cruise. This study will be beneficial for me for three reasons: a) have a solid base knowledge on the surface layer biogeochemistry,  b) future research, these studies will be tools of work for me and c) discuss with researchers and have an opportunity to start the PhD.

I am interested in the oceans because, the ocean, which covers nearly 3/4 of the planet is an essential component of the climate system since it contributes, as the winds redistributing heat and, in particular, to transport energy to the tropics poles. Ocean currents (Gulf Stream, for example) provide about half the heat transport from the equator to the poles, a proportion equivalent to that of the atmosphere. In addition, ocean currents are largely generated by wind and the ocean has a regulatory role of certain climate disruption, as a powerful thermal stabilizer. Reservoir of life and food, communication channel, great purveyor of mineral resources, the ocean form also with the atmosphere, a gigantic heat engine that determines the time and climates. His study is imperative for the management of the planet and affects all scientific disciplines.