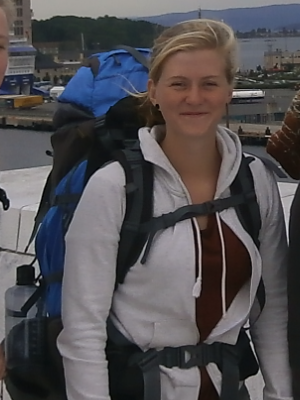 Area: Physics of the Earth System

About myself: Hello, my name is Mareike. I currently live and study in Kiel, Germany. I have finished school in 2012. Afterwards I started working on a sailing ship in the Netherlands. This got me really interested in the ocean and also into meteorology.

This led eventual to me studying physics of the earth system in Kiel. This is a course of study which combines physical oceanography, meteorology and geophysics. Until now my studies consist of fundamental training in mathematics and physics. Later on I attended courses dealing with oceanography and meteorology in greater depth. I plan to finish my bachelor degree in November 2016.

In November 2015 I began working as a research assistant in the department of ‘Ocean Circulation & Climate Dynamics’ at the GEOMAR institute. My job involves processing sea surface anomaly data to detect eddies in the Cape Verde area and in the southern Atlantic. I find it to be a very interesting topic, especially regarding their key role in mixing and transporting momentum and water.

I am looking forward to the cruise since it is a whole new experience for me.