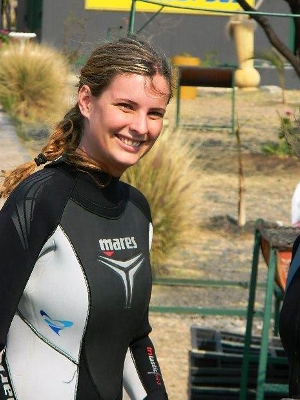 Science theme: Plastic in the Ocean

About myself: I have loved the ocean since I could remember. My father used to read us “The guide to reef fish of Southern Africa” instead of conventional bedtime stories. Personal circumstances did not allow me to study marine biology. Instead, I studied zoology and geology during my pre-graduate studies at the North-West University. From my Honors year (4th year of study) up until now, my focus had been on ecotoxicology. My Master’s degree project is on heavy metal contamination in corals from the Indian Ocean.

In 2014, I had the once-in-a-lifetime opportunity to visit the Mascarene Islands in the Indian Ocean as part of a team to investigate the effect of long distance plastic transfer. However, we realized that, although we were capable ecotoxicologists, none of us had any oceanographic background. This is one of the main reasons why I applied to be part of the cruise. In the Indian Ocean, I saw first-hand the devastating effect that humans can have on the ocean. Islands with no human population whatsoever were covered in plastic and other anthropogenic debris. Now- in the Atlantic- I hope to develop skills and gather knowledge to equip myself to be able to make a positive difference in reducing the plastic load from the ocean. The other reason is that I have always wanted the opportunity to experience the open ocean- to be able to do this while conducting meaningful research is a solid tick off my bucket list!